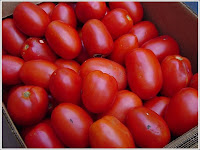 A little over a year ago, my good friend Sal, whom I jokingly refer to as "the most Italian person I know," fondly described to me a yearly activity in which his family used to partake. Every year at the end of the summer, the family would gather together for a weekend, and while the children ran around and played till exhaustion in the August heat, the adults would take perfectly ripe red plum tomatoes and turn them into enough tomato sauce to last the whole year. Throughout the year, whenever his mother wanted to make pasta, Sal was instructed to go to the basement and get a jar of sauce. He lamented that following the death of his paternal grandfather, the yearly tradition of making "the sauce" fell by the wayside.

This story appealed to me for many reasons. I have somewhat of a love/hate relationship with tradition. I don't like to do things just because that's the way it has always been done, but on the other hand, I realized that sometimes there is both great wisdom and great satisfaction to be found in "the way it has always been done." In this case, the latter definitely applies. Traditions such as this one go back to a time before highly processed foods, industrial farming, and grocery stores, when it was impossible to have tomatoes in the winter unless you canned them in the summer. I also loved the idea of gathering together and enjoying the company of family and friends centered not around a birthday or holiday, but an activity that directly contributes to the physical sustenance of all involved. We decided to renew this tradition and keep it alive a bit longer. So last August, Sal and I made our first batch of sauce, under the watchful eye of Sal's grandmother. In broken English and perfect Italian, she passed on her years of sauce making wisdom to us (and stopped to make us a huge spaghetti lunch, with bread and salad and everything).

This year we struck out on our own, and despite a few rookie mistakes, turned out a wonderful batch of sauce. I love the idea of starting with whole, fresh ingredients in the peak of their season and turning them into something that can be enjoyed all year long. I enjoy supporting local farms, and knowing that the furthest my tomatoes had to travel was a few miles. Then there is the confidence of knowing exactly what is going into the food as it is processed (whatever I want to be in there). I take pride in the hard day's work and the product we have to show for it. Lastly, and most important to me, is the idea of family and community that is reinforced by an activity such as this one. It is a tradition worth keeping in a time when it seems like all traditions of any worth are quickly being lost, or worse, replaced with cheap, quick, and soulless imitations all for the sake of saving time. Now every time I make a nice tomato sauce this winter, I will think of my friend, the beautiful Saturday we enjoyed, the good conversation we had and the mess we made! And I will dream of the day when our children are reminiscing about the August weekends they enjoyed running around together as their crazy old dads made sauce in the garage. Who knows? Maybe they'll want to learn how to make a few jars for themselves.
______________________________

The two stars of this show are mason jars and red plum tomatoes. The jars you can get at most grocery stores, and we picked up the tomatoes at a local farm a few days before making the sauce.

Our equipment consisted of many large pots, a few large plastic buckets, some paring knives, a wooden spoon, a propane tank and burner, and a food mill that Sal's dad had hooked up to an electric motor. We set up everything in my garage and got started around 9 in the morning.

The first step was to wash the tomatoes and cut them into quarters. As we did this we would cut out any rotten spots and tossed any tomatoes that were too far gone.

We put the quartered tomatoes into our pots and plastic containers as we cut them. It took us about 3 hours to quarter our 10 cases (200 pounds) of tomatoes. When we cut them all up, we filled a pot about 3/4 full with tomatoes and then covered them with water. We set the pot on the propane burner to begin stewing the tomatoes.

After about 15 minutes, and a good amount of stirring, the pot came to a boil. At this point we would boil the tomatoes until we determined they were cooked and soft enough to mill.

We took the tomatoes out of the pot with a large strainer basket and placed them in a bowl. We'd let them sit for a few minutes and then pour off some of the excess liquid in order to ensure that our sauce would not be too watery. In the meantime, we'd throw another batch of raw tomatoes into the boiling water. We then used a slotted spoon to feed tomatoes into the hopper of the food mill, straining out even more water.

As the tomatoes passed through the mill, the watery pulp of the tomatoes was pressed into sauce which emptied into another pot. The seeds and peels came out of the end of the augur and we collected those in a bucket.

We then strained the seeds and peels and passed it through the mill three more times to extract the maximum amount of sauce from the tomatoes.

After all the tomatoes were stewed and milled, we had about 12 gallons of sauce in 3 large pots. We added 1/2 cup of salt to each pot and then set one onto the burner, and brought it to a boil. While the sauce was coming to a boil, we set out a bunch of mason jars on a table with some basil which my extremely busy wife so graciously washed. We also finally allowed ourselves a beer at this point.

Into each mason jar we placed about a few leaves of the basil.

Once the sauce came to a boil, we let it boil for 20 minutes, stirring every few minutes to make sure it wouldn't stick and burn on the bottom of the pot.

The boiling sauce was ladled into the jars, which were filled as high as possible, and the tops were screwed on tightly.

We then placed the hot jars into cloth lined boxes to cool, and that was that! We finished around 7 that evening, so the whole process took about 10 hours from start to finish. The sauce (which is really nothing more at this point than crushed tomatoes) is amazingly fresh tasting and bursting with tomato flavor.

It tastes great as is, makes a delicious quick sauce with garlic and oil, works wonderfully in my favorite spaghetti sauce recipe, and is perfect on pizza (see the picture below for a sample of my first use of this year's batch). I use it in any recipe I make that calls for crushed tomatoes, which I don't need to buy in the grocery store anymore. 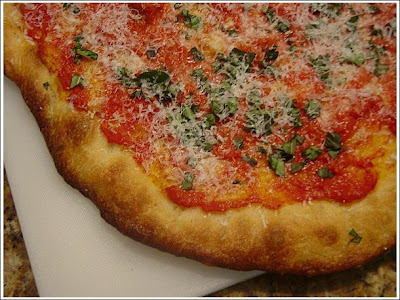 When it comes down to it, I really enjoy making the sauce as much as eating it. Like making bread, another process I've come to love, I get a profound sense of accomplishment throughout the experience, and feel a deeper connection to, and appreciation for, whole ingredients and how they become the foods and tastes that I love so much.
Posted by Darron at 4:40 PM

What a fabulous story!! And your tomato sauce?? Looks AMAZING!! You can ship me a few jars ANY time you'd like! *grin* Seriously though, looks like a great tradition to continue on, and one that your family is sure to appreciate! I've canned tomatoes before, but never tomato sauce - I may have to try it, albeit on a smaller scale!!

Wonderful, and Ooooh so good!

This is something I've done so many times, started as soon as I was old enough to handle a knife ... and there's nothing that it compares too.

The only difference between our procedure is, I start w/a smaller amount of tomatoes in the pot on medium heat until they release their own juices before I add the additional tomatoes, eliminating the need of adding water.

Fantastic set of instructions for something I've been wanting to try.

Two things I'd love to know:
1. how many quart/gallon jars did you end up with?
2. is there no need to process the jars in a water bath? Did the lids seal on their own just from the heat of the sauce?

Renee - Thanks! I'll add your name to the list of people who want a jar...

Lucy - Our sauce came out a little watery last year, this year we were much more careful to get out as much water as possible (and it came out quite a bit thicker) but your method of using the water in the tomato instead of adding water might alleviate this issue completely. Thanks for the suggestion!

Stacia - This year we ended up with 49 quart size jars of sauce. We had more jars last year from the same amount of tomatoes, but we were much more careful about straining out extra water this year to get a more concentrated product.

We fill the jars up to the very top with boiling sauce and immediately put the lids on which seal from the heat. According to Sal's grandmother, they've never had a jar go bad using this method. Good luck with your efforts, they will be well worth it.

Thank you for the wonderful story!

Hi! You are the only one I've ever seen with a tomato-thingy almost like mine! Mine has a crank handle instead, my Mom gave it to me, and that thing is well over 60 years old.

I don't even bother cooking them in water first, I just grind them all up raw (quartered or halved) in that contraption (three times, just like you!) and then cook the whole mess until boiling and then do the canning. Don't you boil the lids first, though? That is crucial to making the seal stick. I've never done the water processing either, and I've never had a jar go bad either, in over twenty years.

I have about 15 pounds from my garden to do tomorrow, before we head out of town for labor day.

What a great day! I wish I could have been there, I even speak Italian!

A friend & I followed these instructions and the results were *fabulous*. We processed 100 pounds of romas, it took us about 6 hours, and we wound up with 32 pints of sauce. We used a food mill attachment for a Kitchen Aid, and it worked great. Darron, thanks so much for sharing your process! Fun & delicious.