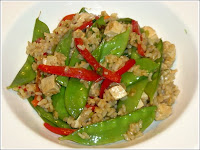 This excellent vegetable fried rice recipe comes from one of the many Moosewood cookbooks, I'm not sure which one though, because it is not one of the ones that I own. The recipe was passed to me from my friend John, who as I may have mentioned before, is no slouch in the kitchen, and is considered (by me) to be one of the most reliable recommenders of recipes (or practically anything else) around these here parts. Red peppers and snow peas provide crunch and color, while a sweet/salty/sour/spicy tofu marinade packs a flavorful punch. Relatively light on the prep, this recipe comes together extremely quickly once the cooking starts, and is substantial enough to stand on its own as a meal.

This recipe calls for 4 cups of cooked brown rice. When making fried rice, it is customary to use day-old or leftover rice, which has had time to shed excess moisture. If you try to make fried rice with fresh rice, you will almost certainly end up with too much moisture in the pan and a mushy result. With a little foresight, this should never be a problem. Cooked brown rice freezes exceptionally well, so next time you make a batch, double it and freeze the leftover in a 4 cup portion. You'll be good to go when the urge for fried rice hits you. Just don't forget to defrost it first. If you don't have any frozen rice, just make a batch the day before you plan on cooking. Check out some other great fried rice tips, and another great recipe, at Simply Recipes.
______________________________

Remove the tofu from the marinade and add it to the skillet, stirring to combine with the vegetables. Add the rice and heat thoroughly. Last, stir in the leftover marinade along with the scallions and you're all done.

Marinade
Posted by Darron at 8:11 PM No comments:

What I've Been Doing With Myself Since January 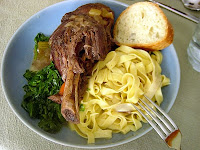 Well, it's been a while since my last blog update, but that doesn't mean I haven't been cooking, baking, and trying new recipes in the intervening months. I thought it might be a good idea to share a bit of what I've been up to before I start making (potentially false) promises about more regular updates in the future.

During the winter I had an amazing meal of braised short ribs with cheddared spinach on a bed of fresh made pappardelle at Caseus, an excellent fromagerie and bistro style restaurant. It inspired me to finally braise some short ribs of my own, and I settled on this recipe from Simply Recipes, which I've made two times. The resulting meat was so amazingly tender and full of flavor from the wine reduction - the beef literally falls of the bone, cuts like butter, and melts in your mouth.

As Easter approached, and I found out I would be hosting my parents and brother for dinner, I decided to try and recreate my entire dinner from Caseus, substituting lamb shanks for short ribs. Of course this meant making my own fresh pasta, something else I had never done. I followed this tutorial, rolling out the pasta sheets by hand since I didn't have a pasta machine. The dough was easy enough to make, but I just couldn't roll the dough out thin enough, and the resulting noodles cooked up thick tough rather than thin and delicate. I bought a pasta machine, and a few days later, made my first batch of delicious fresh pasta (with an assist from my lovely wife since I couldn't quite seem to crank the dough through the machine and hold it coming out the other end at the same time). 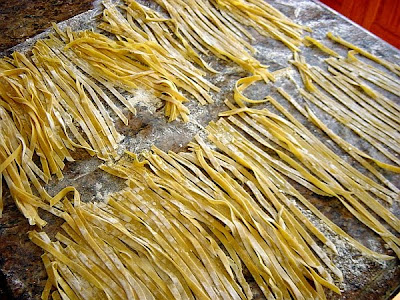 The lamb shanks came out beautifully, as did the fresh fettuccine, and I served it all over my own version of cheddared spinach (steamed baby spinach leaves tossed with microplaned sharp cheddar). I must say that while my recreation didn't quite measure up to the original, it was pretty darn close.
______________________________

This is the simplest and best pasta recipe I've come across in quite a while, thanks to one of my favorite blogs, Smitten Kitchen. Apparently, spaghetti with cheese and black pepper is an Italian pantry cooking staple that I'd somehow missed for my entire life. It's also one of the most beloved dishes at Mario Batali's acclaimed New York restaurant, Lupa. I've probably made this five times since I discovered the recipe, and that's only because I can't justify eating a pound of spaghetti and cheese more than once a week. I want this all the time.

Also from Smitten Kitchen comes the excellent "best cocoa brownies" recipe, which I can't endorse highly enough. Really delicious brownies on the chewy end of the brownie spectrum. I suggest trying peanuts instead of walnuts, for an interesting Snickers-esque quality.

A wonderful guacamole with bacon from Rick Bayless is delicious as a topping for quesadilla, spread on a turkey sandwich, or just eaten with chips. Smoky, spicy chipotle peppers blend nicely with the bacon and tomatoes to make a truly excellent guacamole.

And last but not least, tuna burgers with wasabi mayo. This recipe had been in my "to make" pile for a few years, and I finally decided to make them for a some friends. I would say that these burgers were probably the single best thing I've cooked since January. The comment I left on the blog where I got them pretty much says it all...

I’ve had this recipe in my “to make” pile for 3 years! Well, I finally got around to making it last night, and though I was initially hesitant about doing anything with such beautiful tuna as giving it a light sear and eating it extremely rare, I must say this recipe is amazing!

Without hyperbole, I can honestly say this is the best non-beef burger I’ve ever had, and it’s not even close. Great recipe! Thanks!

Using high quality tuna is a must, so this recipe is not a cheapie, but as an every once and a while splurge, is definitely worth the high price tag. I also baked some pita to stuff these into, and highly recommend you do the same (or at least buy some pita).

So that pretty much brings us up to speed...now, I promise to update more regularly from here on out (heh heh heh).

Posted by Darron at 9:03 AM No comments: 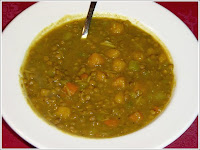 I had a beautiful, three pound butternut squash sitting on my counter for about a month. It was the last item we purchased at the local farm before it closed for the winter, and for weeks I never seemed to be able to work it into a meal. I think that my subconscious mind was just in denial that the farm was closed until the spring, and that somehow, by preventing me from using the squash and having it sit on the counter instead, it was almost as if the farm never closed at all. But alas, my conscious mind won out, the farm is indeed closed, and the squash had to be used.

New Year's day provided the perfect opportunity. I was already planning on roasting a pork shoulder (great recipe here), and I had some leftovers from a baked pasta/sausage and peppers combo I had made a few days prior, but was looking for a vegetarian option to round out the menu. Perhaps a soup utilizing squash and lentils? A quick search on the internet yielded this recipe, which seemed to be just what I was looking for. After reading through the comments, I made a few modifications, namely increasing the curry powder and garlic, decreasing the amount of liquid by half, and adding in some chili powder and shredded coconut. Oh, and I left out the ginger, because I really don't like ginger. The finished product was a thick lentil stew, sweetened by the squash, with the the coconut providing a really nice reinforcing accent to the curry flavor. It was definitely a hit, and I've already made it again, although sadly, I had to get the squash at the supermarket.
______________________________
This is a very easy recipe. All the work is in the prep. Once everything is chopped, you heat the oil/butter in a large pot until the butter stops foaming, then add the onions, squash, carrots, celery, garlic, and salt then cook for about 15 minutes. Stir in the curry powder and chili powder and stir for a few minutes, then stir in the lentils and coconut.

At this point, add the stock and simmer, covered, until the lentils are cooked. The recipe suggests serving over basmati rice, but I haven't done this yet as the stew is pretty hearty on its own. I also haven't tried the cilantro oil, because I don't like cilantro. The second time I made this recipe, I found it to be at its best on the third day. If you like your stew more like soup, just add more stock (the original recipe calls for twice what I used). 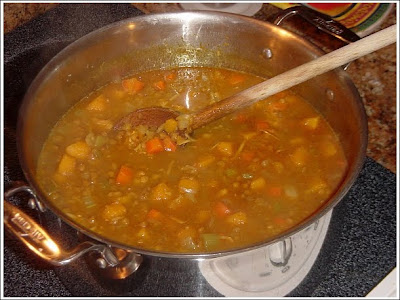 Curried Squash and Lentil Soup (adapted from Epicurious)
Serves 8 as a main course - 1 1/2 hours start to finish
Posted by Darron at 5:51 PM No comments: